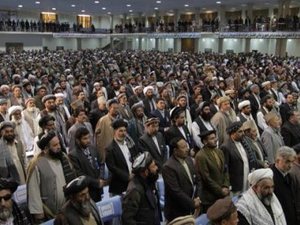 Afghan elders Saturday endorsed a long-term strategic partnership deal with the United States while insisting on a string of binding conditions.

Their declaration came at the end of a four-day loya jirga or traditional meeting which also supported holding talks with members of the Taliban who renounce violence, despite the murder of peace envoy Burhanuddin Rabbani.

President Hamid Karzai told the jirga, which united around 2,000 elders from around Afghanistan, that he accepted its conditions and recommendations.

Its stipulations included emphasizing that U.S. nationals who commit crimes in Afghanistan would not be immune from prosecution and the U.S. must side with Afghanistan if a third country tried to attack it.

The strategic partnership deal will govern the presence of U.S. troops in Afghanistan after 2014, when all NATO-led foreign combat forces are due to leave.

The jirga's findings on the deal, which is still being negotiated by Kabul and Washington, are non-binding.

But they are likely to be used as Karzai to claim he has a general mandate from the Afghan people for his strategy in the ongoing negotiations.

"The jirga has decided that the strategic partnership, for better security in the country, is needed," said the declaration, read out to the meeting of around 2,000 elders in Kabul by jirga spokeswoman Safia Sediqi.

"With regards to the national interest of Afghanistan, the strategic partnership is considered very important."

Other conditions stipulated by the jirga on the partnership deal were that it should be for 10 years initially, although that could be extended, plus that Afghan security forces should take the lead in all military operations.

The jirga also called for the Afghan parliament to approve the strategic partnership deal and said that the U.S. should not play out regional rivalries on Afghan soil.

A number of leading Karzai opponents boycotted the loya jirga while some analysts accused the president of seeking to manipulate the meeting to gain backing for a deal which many Afghans strongly oppose.

"The aim of the jirga appears not to be to deliver fresh policy but to get political cover so the president can cite it as evidence that the people supported a deal with the Americans," Kate Clark of the Afghanistan Analysts Network wrote this week in a blog.

The jirga also voted to endorse peace talks with Taliban members who turn their backs on violence after Rabbani's killing, which badly stalled any hopes of a political settlement with the insurgents.

"The door of peace should be kept open with the armed opposition who wish to abandon violence and return to a peaceful life but we must ensure that the bitter experience of the past is not repeated," the declaration said.

Well, all that one can say is that these Afghan elders will be made to see their Creator faster than anyone thought, if you know what I mean.

sure...they and their 5% of territory they control