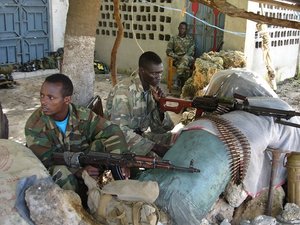 "There are several hundred Ethiopian troops here in lorries and some armored vehicles too," said elder Abdi Ibrahim Warsame, speaking by telephone from Gurel town, in Somalia's central Galgudud region.

Ethiopian forces were also reported in the Hiran region at the town of Beletweyne, some 30 kilometers into Somalia, an area contested by Islamist Shebab rebels and pro-government militia.

"They are here, the Ethiopian soldiers in trucks have reached Beletweyne with many forces," said elder Ahmed Liban. "The Shebab in the area are pulling back, away from them."

But Ethiopia dismissed the reports outright.

"It is absolutely not true, there are absolutely no troops in Somalia," said Ethiopian foreign ministry spokesman Dina Mufti. "People are simply speculating."

Small numbers of Ethiopian forces have been reported operating in Somali border regions in the recent past, but witnesses said the scale of troop movements was this time far larger.

If confirmed, it would be Addis Ababa's first large scale incursion since it invaded Somalia in 2006 with U.S. backing.

Ethiopia pulled out three years later after failing to restore order in its lawless neighbor, which has lacked a functioning government for two decades.

The Galgudud area is largely under the control of an anti-Shebab militia called Ahlu Sunna wal Jamaa, factions of which have close ties with Ethiopia.

Ethiopian soldiers were reported to be up to 50 kilometers inside Somalia in that area.

Hardline Shebab insurgents control much of southern Somalia, but are battling both the Western-backed government in Mogadishu and Kenyan troops in the far south, who crossed the border last month to attack rebel strongholds.

African Union officials and members of the regional peacekeeping body, the Intergovernmental Authority on Development (IGAD), held talks this week on bolstering the 9,700-strong AU Mission in Somalia (AMISOM).

But no decision for Ethiopia to join Ugandan and Burundian forces in the mission had been made, Dina said.

"There is an intention on the part of IGAD members to bolster peacekeeping forces, because as you know the regional countries are working on increasing the numbers of AMISOM," Dina said.

"As to Ethiopian (troops) there is nothing that has been decided."

The humanitarian crisis in central and southern Somalia sparked by years of conflict and extreme drought is the worst in the world, the United Nations said Friday, with nearly 250,000 people facing imminent starvation.

Although the U.N. downgraded three famine alerts Friday to emergency levels, three other famine zones remain, and aid agencies warn that conflict is hampering access to those in need.