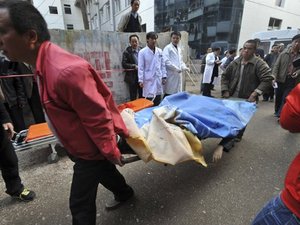 The explosion occurred around 2pm at a melamine production facility in Xintai, in Shandong province, Xinhua news agency reported.

Workers were maintaining and repairing a condenser when the blast occurred, Xinhau said, citing a statement by the Xintai city government.

Four workers died immediately and a further 10 died in hospital. The five injured were in a stable condition and an investigation into the cause of the accident was under way, Xinhua said.

In September, three people were killed in an explosion at a privately-owned chemical plant in east China's Jiangxi province.

Among other recent deadly industrial accidents, last week at least 34 miners were killed in a blast at coal mine in the southwestern province of Yunnan.

In October, 12 workers building an underground parking lot in northeast China were killed when a concrete ceiling collapsed on them. Days earlier another dozen workers died at a steel plant in the eastern city of Nanjing when molten iron spilled from a furnace.