McChrystal on Return Visit to Afghanistan 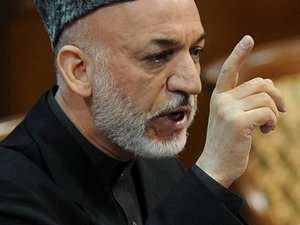 McChrystal was recalled by President Barack Obama from his role leading NATO troops in the war against the Taliban over comments made by him and his aides about senior political leaders to Rolling Stone magazine.

But he and Karzai enjoyed warm relations and McChrystal and his wife are now spending several days in Afghanistan "as special guests of the president," a statement from the Afghan presidential palace said.

"President Karzai once again thanked General McChrystal for a mission he called sincere and courageous and for all his efforts and services during his command in Afghanistan," the statement said.

"Also, the president made a specific reference to General McChrystal’s efforts to prevent civilian casualties and thanked him for all that on behalf of the people of Afghanistan."

The issue of civilian casualties in NATO raids is a highly sensitive one in Afghanistan and one over which McChrystal's successor, General David Petraeus, issued an apology earlier this year following the deaths of nine children in a NATO airstrike.

When news of the potential visit to Afghanistan first emerged last month, some analysts raised the possibility that McChrystal, who is now retired, could in future act as an informal contact between the U.S. and Afghanistan.

Relations between Karzai and many U.S. officials are rocky, although the U.S. provides the bulk of the 140,000-strong foreign force which is helping Afghan security forces to fight the Taliban.

Earlier Saturday, Afghan elders at a traditional meeting or loya jirga in Kabul endorsed a proposed strategic partnership deal which Karzai is negotiating with the U.S.

This will govern the presence of U.S. troops in the country after 2014, when all NATO-led combat forces are due to leave Afghanistan.