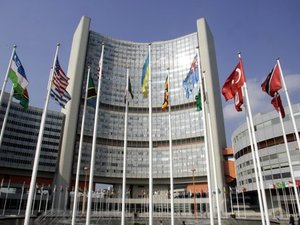 "The aim of the United States was to send the Iranian issue to the Security Council.... Thanks to the efforts of the Islamic Republic on the international stage, the American intention failed," Ali Bagheri said, according to the website of Iranian state television.

His comment was the first high-level reaction in Iran to a Friday vote by the U.N.'s International Atomic Energy Agency to pass a resolution condemning Iran's nuclear activities following a recent IAEA report strongly suggesting they involved research for atomic weapons.

The resolution -- worded to pass muster with Iran's allies Russia and China -- notably stopped short of sending the matter to the U.N. Security Council.

Instead, it said it was "essential for Iran and the Agency to intensify their dialogue" and called on Tehran "to comply fully and without delay with its obligations under relevant resolutions of the U.N. Security Council."

It gave no deadline for those demands to be met, but said IAEA head Yukiya Amano would report to the board in March on Tehran's implementation of the resolution.

The U.N. Security Council has already imposed four sets of sanctions on Iran to pressure it to halt its nuclear activities.

Tehran, which rejected the recent IAEA report as "baseless," and denies all Western allegations it is seeking a nuclear arsenal, has refused.

Amano said last Thursday he had proposed sending a high-level team to Iran to "clarify the issues" in the IAEA report, and asked Tehran "to engage substantively with the agency without delay."

Bagheri was quoted as saying Iran had already twice offered to host such visits before the IAEA report and board meeting.

Iran's representative at the IAEA, Ali Asghar Soltanieh, was quoted by the ISNA news agency Saturday as also highlighting those offers.

"The director general's announcement that the agency is now ready to send a team of inspectors must be studied again and the result will be announced after that," he said.