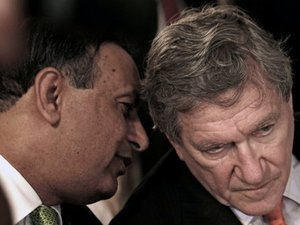 Pakistan's ambassador to the U.S. returned home Sunday after being summoned to answer questions about his alleged role in a secret memo scandal that could cost him his job and threatens to engulf the country's president.

The controversy centers on a memo that was sent in May to Adm. Mike Mullen, the top U.S. military official at the time, asking for his help in reining in Pakistan's powerful military after the covert American raid that killed Osama bin Laden in a Pakistani garrison town.

Mansoor Ijaz, a U.S. citizen of Pakistani origin, has claimed that Ambassador Husain Haqqani orchestrated the memo, which has been published in the media and does not include an author's name. The document has shocked many Pakistanis because it offered to replace Pakistan's national security hierarchy with people favorable to Washington in exchange for help.

Haqqani has denied the allegations but has offered his resignation to end the controversy. He is expected to meet with Pakistani President Asif Ali Zardari and other senior officials during his visit to explain his position on the scandal.

Ijaz has claimed that Haqqani told him Zardari approved the secret memo, an explosive allegation that could roil Pakistan's political system if proved true. The president has denied the claim.

Some commentators have called for those involved in the scandal to be tried for treason.

The controversy has exacerbated tensions between Pakistan's shaky civilian government and its powerful army generals. Though Pakistan has a civilian president, the military retains vast political and economic power. It has ruled Pakistan, directly or indirectly, for much of the country's six-decade existence, and has fiercely resisted attempts by civilian leaders to curb its role.

The memo has fueled politically toxic charges that the government is colluding with the U.S. against the interests of the country and its army. Though Washington pumps huge amounts of aid into the country, the U.S. is highly unpopular there. The affair has been whipped up by right wing critics of the government and those close to the military establishment, which doesn't trust Haqqani.

The memo accuses Pakistan army chief Gen. Ashfaq Pervez Kayani of plotting to bring down the government in the aftermath of the bin Laden's assassination on May 2. It asks Mullen for his "direct intervention" with Kayani to stop this.

The bin Laden raid sparked outrage at the U.S. because the Pakistani government was not told about it beforehand. It also generated unusual domestic criticism of the Pakistani military because it was not able to stop U.S. commandos from sneaking into the country.

Some analysts have questioned Ijaz's credibility and suggested the affair is a conspiracy cooked up by the military to embarrass the government or remove Haqqani. They have pointed out that the fear of a coup is strange since the military was on its heels at the time.

Ijaz, a businessman, first revealed the secret memo in a column in the Financial Times on Oct. 10. He has a history of making claims to be well connected with U.S. politicians. Under the Clinton administration, he said American officials told him Sudan was willing to turn over then-fugitive bin Laden, who was taking refuge there. Ijaz said Clinton National Security Adviser Sandy Berger rejected the deal because he was unwilling to do business with Sudan — a claim that Berger immediately denied.