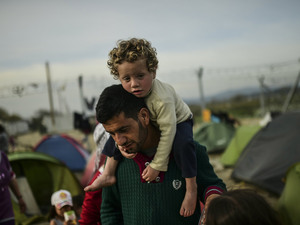 Hungary and Poland on Wednesday slammed a European Union plan to fine member states that refuse to accept their quota of refugees, with Budapest calling it "blackmail" and Warsaw saying it sounded like an April Fool's joke.

The European Commission has proposed making EU countries pay a "solidarity contribution" of 250,000 ($290,000) euros per refugee they decline to take in as Europe struggles with its worst migration crisis since World War II.

"It's blackmail, it's unacceptable and a non-European type of proposal from the (European) Commission," Hungary's Foreign Minister Peter Szijjarto said after a meeting of top diplomats from four central European EU members and five post-Soviet countries in Prague.

The Visegrad-four countries -- the Czech Republic, Hungary, Poland and Slovakia -- have staunchly opposed the quota system proposed by the EU to distribute refugees.

All four countries argue asylum seekers are not interested in long-term stays in central or Eastern Europe and would seek to move to wealthier EU member states such as Germany instead.

Hungary and Slovakia challenged the quota proposal in court last December and Budapest also expects to hold a referendum on it later this year, arguing that the quota system violates its national sovereignty.

Beside the asylum policy overhaul, the EU on Wednesday also gave conditional backing to visa-free travel for Turks and announced an extension of border controls in the passport-free Schengen zone as it tries to tackle the huge influx of refugees and migrants.

Szijjarto said Turkey would be entitled to a visa-free regime only if it complied "with all the requirements".