Jumblat: Why are Security Agencies Suddenly Silent over Illegal Internet? 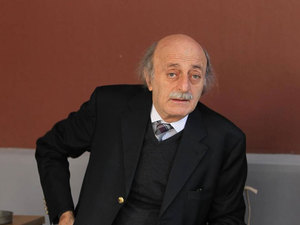 Progressive Socialist Party leader MP Walid Jumblat wondered on Friday where the equipment that had been planted on illegal internet stations had disappeared to in wake of the parliamentary telecommunications committee's revelation that they had been removed by unknown sides before investigators were able to inspect them.

He noted via Twitter the “sudden silence of the security agencies, intelligence bureau, army intelligence, and General Security” on the illegal internet issue.

“These are the same agencies that used to compete with each other to uncover Israeli agents, but why are they silent now?”

“The case may not be part of the General Security's jurisdiction, but what about the Internal Security Forces Intelligence Bureau?”

He also wondered: “Why is it that a certain powerful minister has been absent from the telecommunications committee meeting?”

The PSP chief hailed the committee on its efforts, particularly those of MP Hassan Fadlallah, in following up on the illegal internet file.

Furthermore, Jumblat asked how the army was lured into joining to the illegal network.

“Is there such a great security breach that prevents the judiciary from uncovering the truth and who are these security and political powers” that are capable of such a feat? he continued.

He condemned the “rampant corruption” at all institutions, noting that this time it is taking place “at the expense of national security.”

“This is a major scandal,” he tweeted.

Fadlallah vowed on Thursday that the judiciary will continue on investigating the case of the illegal internet, stressing that this issue will not be victim of a political cover-up.

He revealed that Israel had set up some equipment on the illegal internet stations that were discovered earlier this year, adding that this equipment was dismantled before inspectors could reach them.

Telecommunications Minister Butros Harb revealed last month that around four illegal internet stations have been proven to exist in the mountainous terrains of al-Dinnieh, Ayoun al-Siman, Faqra and Zaarour.

Suspects involved in the case are believed to be associated with the state-owned OGERO were arrested over possible links to the networks.

Harb said Thursday that eight people have so far been detained following the investigations.

Early in March, the parliamentary media committee unveiled what it described as a “mafia” that are taking advantage of internet services by installing internet stations that are not subject to the state control.

The owners of these stations are buying international internet bandwidth with nominal cost from Turkey and Cyprus which they are selling back to Lebanese subscribers at reduced prices.