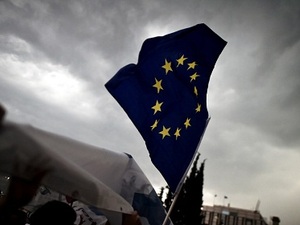 Around a quarter of a million Poles flooded central Warsaw Saturday, marching to defend their country's place in the European Union and protest against moves by the right-wing government, which they say undermine democracy.

Warsaw city hall said the protest drew some 240,000 people, making it one of the largest demonstrations since the 1989 collapse of communism in Poland.

The mammoth protest came as an annual pro-EU parade merged with a demonstration called by a coalition of pro-democracy groups and opposition parties.

The huge mass of marchers shouted pro-EU and pro-democracy slogans as they inched through the sun-drenched city center, brandishing a mix of red-and-white Polish flags along with blue and gold EU flags.

"We're here because we want to fight for Poland's freedom, for democracy," former president Bronislaw Komorowski, a liberal, told marchers as the demonstration got under way.

The protest comes amid a mounting political crisis in the central European heavyweight, triggered by changes the populist-oriented Law and Justice (PiS) government has made to the constitutional court.

In December it pushed through legislation to stack the court and modify its decision-making rules.

The court itself struck down the changes as unconstitutional in March, pitting it against the PiS majority government, which wasted no time to dismiss the ruling.

The resulting deadlock means the court is paralyzed, leaving Poland without a fundamental check on government powers.

The PiS moves have drawn sharp criticism from the EU and the European Parliament, which Warsaw has dismissed as unnecessary interference in its internal affairs.

Ultra-nationalist parties and sympathizers organized a counter-demonstration in the capital Saturday, drawing around 2,500 people insisting that Poland's EU membership meant it was subject to the "diktat of Brussels".