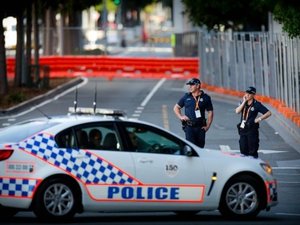 Five young men face life behind bars after they were charged with terrorism offenses over a plan to sail to Indonesia to join jihadist groups in Syria, Australian police said.

The men, aged in their twenties and early thirties and whose passports had been canceled, included notorious Australian Islamic preacher Musa Cerantonio, who was detained in the Philippines in 2014 and deported for reportedly urging people to join jihad in Iraq and Syria, the Australian Broadcasting Corporation reported.

The men, who were arrested on Tuesday, bought a seven-meter (23-foot) boat and drove it 2,840 kilometers (1,765 miles) from Melbourne north to Queensland state where they planned to set sail to Indonesia, the Australian Federal Police said.

"The men... were each charged with one count of making preparations for incursions into foreign countries for the purpose of engaging in hostile activities," the Australian Federal Police said in a statement late Saturday.

"The maximum penalty for this offense is life imprisonment."

The Australian Broadcasting Corporation named two of the other men as Shayden Thorne and Kadir Kaya.

The Federal Police said there was no current or impending terrorism threat from the case and that the men were due at a Queensland state court hearing on Monday.

Canberra has been increasingly concerned about its citizens fighting with jihadist organizations such as Islamic State in Iraq and Syria, saying some 110 Australians had left the country to join such groups.

The government has also been worried about homegrown extremism and the terror threat level was raised to high in September 2014.

It has passed numerous national security laws including legislation allowing for passports to be canceled to prevent Australians from leaving the country.

"Their passports were canceled by the Foreign Minister (Julie Bishop) because the relevant level of concern about their intentions were known to us," Brandis told reporters in Brisbane.

"There is a number of people in Australia under surveillance, and in the event that they were to attempt a terrorist crime, or to attempt to leave Australia in order to perpetrate terrorist war fighting overseas, then they would be taken into custody."

At least six attacks have been foiled on home soil over the past 18 months, but several have taken place, including the terror-linked murder of a Sydney police employee in October.