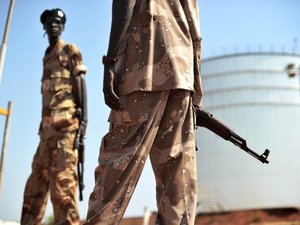 Envoys of U.S. President Barack Obama voiced "deep concern" at violence and the humanitarian crisis on the border of Sudan and South Sudan during a visit to the region, the White House said Monday.

Deputy National Security Advisor Denis McDonough joined Washington's special envoy for Sudan, Princeton Lyman, for talks in Khartoum and then in Juba, the capital of newly independent South Sudan, on Sunday and Monday.

In Khartoum, the two "discussed the urgent crisis in the states of Southern Kordofan and Blue Nile in Sudan and recent cross-border attacks that threaten the peace," National Security Council spokesman Tommy Vietor said.

"They reiterated the United States' deep concern over continuing fighting in Southern Kordofan and Blue Nile and the ongoing humanitarian crisis caused by the fighting, which is exacerbated by the Government of Sudan's blocking of international humanitarian assistance to the civilian population," he added.

The U.S. envoys also discussed U.S.-Sudan ties, and the need for the two sides to settle their post-division differences in order to ensure a lasting peace, Vietor said. The same issues were raised with officials in Juba, he said.

North and South Sudan fought a two-decade civil war up to 2005 which left two million dead. Following their division this year, they have been unable to agree a border and the sharing of revenues and debts. Tensions have shot up in recent weeks.