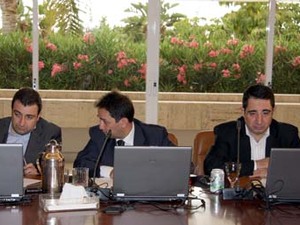 Cabinet clearly believed that 50/50 was the fair way to get with less fuss over the issue of voting against or abstain from voting for new U.N. Security Council sanctions on Iran.

So a decision not to side with either political camp was taken after Cabinet ministers were equally divided between voting against the U.N. proposal and abstaining from the vote.

They said while Suleiman tipped the balance in favor of the Opposition, Jumblat rescued March 14 forces from the situation.

"I was initially with abstaining from a (U.N.) vote on Iran sanctions," Jumblat said in remarks published Thursday by the daily As-Safir.

"And before that, I was not enthusiastic about Lebanon being a member in the Security Council," Jumblat added.

"But under this reality, the position expressed by Ambassador Nawaf Salam was the best for Lebanon because we are not a large country such as Turkey and Brazil.

"What we did avoided Lebanon from submerging into the game of nations," Jumblat noted.

After the dispute widened between the 14 ministers of each of the rival political camp in the National Unity Government just hours prior to the Security Council meeting, Cabinet conveyed to Lebanon's representative in the U.N. Nawaf Salam that it had not been able to reach a decision.

Salam said the issue over Iran's nuclear program "could be resolved through peaceful means rather than sanctions and this is Lebanon's position."

"We did not reach a final decision after evaluating the issue thus we abstained from voting," he said.