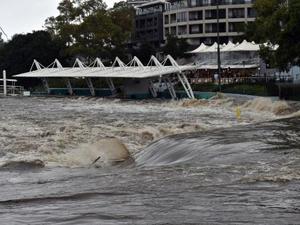 Wild weather which smashed into Australia's east coast and whipped up giant waves on Sydney beaches has left at least three people dead and others missing, police said Monday as the clean-up began.

Ferocious storms pounded the coast over the weekend, causing flooding in New South Wales state. Huge seas eroded the shoreline, in one instance sweeping the in-ground swimming pool of a beachside home onto the beach.

"This storm, which was so ferocious, has taken life from us," New South Wales Premier Mike Baird said as he warned that conditions remained dangerous.

"It is clear -- the ferocity of this storm was such that the damage has been unbelievable up and down the coast."

The Bureau of Meteorology said a combination of rain, wind and wave action had created the conditions which saw beaches strewn with debris and rivers and creeks bursting their banks.

One part of Sydney suffered its worst flooding in 30 years, while the city's Observatory Hill weather station received some 226 millimeters (8.9 inches) of rain over the weekend -- well above the average monthly rainfall for June of 131.9 millimeters.

The bureau said a wind gust in excess of 115 kilometers per hour (71 mph) was recorded in Sydney Harbour, while two of the airport's three runways were closed due to high winds.

Police said divers had retrieved two bodies from cars swept away by floodwaters, one in the southwestern Sydney suburb of Leppington and another near the town of Bowral, some 100 kilometers south of the city.

"It is a tragedy these two lives have been lost. We simply do not know how either of these two men came to be in the flood waters," said acting assistant state police commissioner Kyle Stewart.

"But what we know is that their deaths show just how dangerous flood waters are."

Authorities said the body of a third man was found near a flooded river crossing close to Canberra.

The storm swept south from Queensland, through New South Wales and onto Tasmania where police Monday held grave fears for two people thought to have been swept away by floodwaters.

A man aged in his 80s was believed to have been swept away, Tasmanian police said, while the wife of another elderly man rescued by helicopter through the roof of his inundated home was missing.

A swimmer seen in distress at Sydney's Bondi Beach was also missing after lifeguards and a rescue helicopter failed to find him.

Abnormally high tides and damaging surf were still pounding parts of the New South Wales coast late Monday, and flood warnings were in place in Tasmania.

In the hard-hit northern Sydney beach suburb of Collaroy, Fran Young was left to contemplate the ocean which had swallowed part of her waterfront garden overnight.

"It was definitely the most ferocious (storm) I've ever seen; the sea was pounding," she told AFP. "It felt like it was coming directly, straight at all of us."