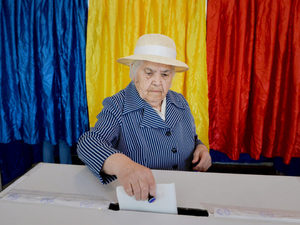 Romania's Social Democrats topped the polls in weekend municipal elections that were overshadowed by corruption scandals, with their candidate becoming the first female mayor of Bucharest, partial results showed Monday.

Gabriela Firea, a 43-year-old former journalist backed by a leftist alliance of the Social Democratic Party (PSD) and the National Union for the Progress of Romania, received 43.56 percent of the vote in the capital.

Her win puts the PSD back in control of the city, nine months after PSD-backed former mayor Sorin Oprescu was arrested on charges of taking bribes.

Nicusor Dan, a mathematician and heritage activist who ran on behalf of the Save Bucharest Union, trailed in second place with 29.05 percent.

Sunday's elections were seen as a key test for the main parties following a devastating nightclub fire in Bucharest in October that killed 64 people and brought down the corruption-tainted administration of Social Democratic ex-premier Victor Ponta.

His party bounced back on Sunday, winning 42 percent of the vote for local councils, ahead of 32 percent for the National Liberal Party (PNL), results from a third of polling stations showed.

The PSD had a similar lead in the departmental and mayoral races, the partial tally showed.

Despite public anger over corruption and mismanagement, several politicians who are under investigation were re-elected on Sunday.

In the northwestern town of Baia Mare the outgoing mayor, who is being held on suspicion of taking backhanders, was re-elected with nearly 70 percent of the vote, partial results showed.

"I am honoured by your vote. With your support I will come back, more determined than ever to work for Baia Mare," Catalin Chereches, who is accused of pocketing tens of thousands of euros in bribes, wrote from prison on his Facebook account.

Politicians who have either been accused of, or convicted of corruption, were also returned to office in the southern city of Craiova, the central city of Brasov and Ramnicu Valcea in the south.

One of Europe's poorest countries, Romania is being run by an interim technocratic government until the next general election in the autumn.