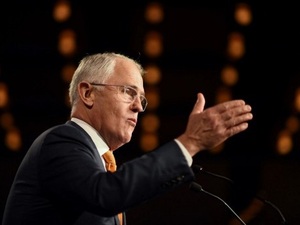 Australian leader Malcolm Turnbull took full responsibility Tuesday for a disastrous election campaign which has left his government in doubt, but said he would not resign.

The final result from Saturday polls is still unclear, but Turnbull's conservative coalition has lost its comfortable majority in Canberra's 150-seat House of Representatives.

The government and the opposition Labor Party are currently each short of the 76 seats needed to govern, and with the vote count ongoing, there is the prospect of a hung parliament.

"I want to make it quite clear that as prime minister and leader of the Liberal Party, I take full responsibility for our campaign," Turnbull told reporters in Sydney.

"The Australian people have voted, and we respect the result."

In sharp contrast to an angry speech in the hours after the vote, he acknowledged there was a swing against his Liberal/National coalition, but said general voter dissatisfaction also played a part.

Millions of Australians cast their votes for independents and minor parties, resulting in them likely winning at least five seats in the lower house.

It is a similar story in the upper house Senate, with anti-immigration firebrand Pauline Hanson set to make a return to Canberra after an absence of nearly 20 years.

"There is no doubt that there is a level of disillusionment with politics, with government, and with the major parties. Our own included. We note that. We respect it," Turnbull said.

But the millionaire former banker and barrister also attacked his Labor opponents, accusing them of a dishonest scare campaign targeting the nation's universal healthcare system which he said amounted to a "shocking lie".

"There is no doubt that Labor cynically abused the trust of Australians by lying to them about this," Turnbull said, referring to Labor's suggestion that the government planned to privatize Medicare.

"What we have to recognize is that many Australians were troubled by it. They believed it or at least had anxieties raised with it."

On Monday, Labor leader Bill Shorten urged the prime minister to resign, saying: "Mr. Turnbull clearly doesn't know what he is doing. Quite frankly, I think he should quit."

But Turnbull, who became prime minister in September after ousting his colleague Tony Abbott in a party room vote, said he remained confident of forming a majority government.

The 61-year-old dismissed the idea of quitting, saying his job was to "get on and govern".

Within minutes of Turnbull's press conference, Shorten raised the prospect of the prime minister calling a snap election.

"I have no doubt that the easy option for him would be to pull the rip cord and have another election. But Australians don't want that," Shorten said.

When he became prime minister in 2015, Turnbull was the nation's fourth leader in two years following a turbulent period in which sitting leaders were ousted by their own party.

After calling this election early in a bid to shore up his power, he is now reportedly facing a revolt from within his conservative party, prompting senior Liberals to call for calm.

Attorney-General George Brandis warned against infighting or public criticism, saying this would be unhelpful if Turnbull ended up forming a minority government with the support of independents.

But he added that whatever the result, his party was united in its desire to win the next election, likely in 2019.

"The surest way to lose the next election is for us to commence the new parliament with an entrenched culture of infighting," he told the Australian Broadcasting Corporation.

The initial vote counts from Saturday's polls were inconclusive, giving the ruling coalition an estimated 68 seats, Labor 67, others five and leaving 10 in doubt.

Counting of up to three million votes sent by mail or cast by people who were outside their electorate got underway on Tuesday.