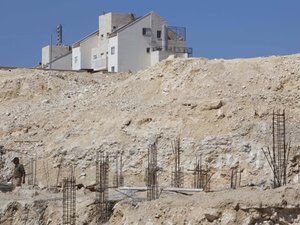 The United States on Tuesday criticized Israel's plans to build 560 new settler homes in the West Bank, warning that they would be part of "systematic" land seizures undermining chances for peace.

Israel's green light for the homes came days after a key report from the diplomatic Quartet -- the United States, European Union, United Nations and Russia -- warned that Israel's settlement expansion and confiscation of Palestinian land were eroding the possibility of a two-state peace settlement.

Completion of the homes would "be the latest step in what seems to be a systematic process of land seizures, settlement expansions and legalizations of outposts that is fundamentally undermining the prospects for a two-state solution," State Department spokesman John Kirby said.

"We oppose steps like these, which we believe are counterproductive to the cause of peace in general," he told a briefing.

The approval follows calls inside Israel for a harsh response to the latest spate of Palestinian attacks.

On Thursday, 13-year-old Israeli-American Hallel Yaffa Ariel was fatally stabbed in Kiryat Arba settlement on the outskirts of the flashpoint West Bank city of Hebron.

Her 19-year-old Palestinian assailant was then shot dead by a security guard.

A day later, Sarah Tarayra, 27, was shot dead after drawing a knife on Israeli forces in Hebron. She was a relative of the Kiryat Arba attacker.

The Quartet report also called on Palestinians to halt attacks and incitement to violence.

Peace talks have been at a complete standstill since a US-led initiative collapsed in April 2014.

Isn't it a pity the the US government doesn't remember that it was a previous US administration which occupied Sioux, Apache, Navaho, Cheyanne and tens of other tribal lands in order to build houses and towns for "the white man". Or is it that they believe "Do as I say, not as I do"!!"

The difference is that the Indians were pacified, while Palestinians can still fight for their rights.