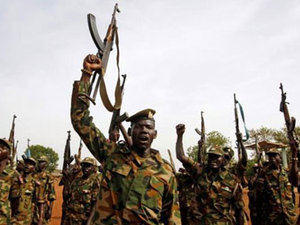 The United States demanded an immediate end to renewed fighting in the capital of South Sudan on Sunday, ordering all non-essential personnel out of the troubled country.

"The United States strongly condemns the latest outbreak of fighting in Juba today between forces aligned with President Salva Kiir Mayardit and those aligned with First Vice President Riek Machar Teny, including reports we have that civilian sites may have been attacked," State Department spokesman John Kirby said in a statement.

"In response to ongoing violence in South Sudan, the Department of State ordered today the departure of non-emergency personnel from the US Embassy in Juba."

Urging Americans in the country to take security precautions, he warned that "the embassy's ability to provide emergency services to US citizens in Juba is extremely limited."

The battles are the first between the army and ex-rebels in Juba since rebel leader Machar returned to take up the post of vice president in a unity government in April, under an accord to end a bloody civil war.

Washington is pressing "both leaders and their political allies and commanders to immediately restrain their forces from further fighting, return them to barracks and prevent additional violence and bloodshed," Kirby said.

"The United States is determined to ensure appropriate measures are taken to hold accountable those responsible for continuing fighting and violations of international humanitarian law, including attacks on the UN Mission in South Sudan (UNMISS) and targeting of civilians."

Kirby said the United States was in touch with senior African Union and regional leaders.

Yup we started it and now we changed our mind and wanted it ended.