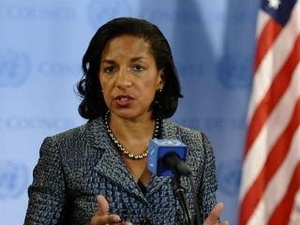 "The United States condemns in the strongest terms the return to violence in South Sudan. It must stop," National Security Advisor Susan Rice said in a statement.

"This senseless and inexcusable violence -- undertaken by those who yet again are putting self-interest above the well-being of their country and people -- puts at risk everything the South Sudanese people have aspired to over the past five years."

The United States has long been a key supporter of South Sudan, the world's youngest nation, which became independent from Sudan in 2011.

South Sudan's president Salva Kiir and his estranged deputy Riek Machar ordered a ceasefire, kindling hope that three days of fierce fighting between the army and former rebels would end.

"Armed leaders, their commanders and forces must focus their resources on bringing about an immediate end to the violence," Rice said. "We call on those fighting to return to their barracks."

Rice served as the assistant secretary of state for African affairs under former president Bill Clinton, and was later ambassador to the United Nations under President Barack Obama before assuming her present role.

The current fighting between soldiers loyal to Kiir, a member of the Dinka tribe, and former rebels backing Machar, a Nuer, was triggered by a deadly altercation at a checkpoint Thursday night.

"Instead of honoring this anniversary, the recent violence will instead inflict yet another wave of trauma on South Sudanese citizens, who have suffered far too much already," Rice said.

Civil war erupted in South Sudan in December 2013 when Kiir accused Machar of plotting a coup.

Tens of thousands of people have been killed and more than two million been driven from their homes in a conflict that has reignited ethnic divisions.