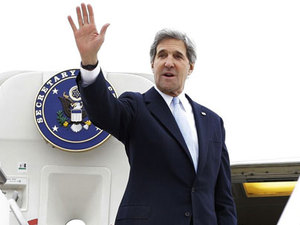 US Secretary of State John Kerry will make his latest trip to Moscow this week to seek common ground on how to deal with the ongoing bloodshed in Syria.

The State Department said Kerry would speak with senior Russian officials about Syria and Ukraine, as well as tensions between Armenia and Azerbaijan over the Nagorny-Karabakh region.

Spokesman John Kirby played down reports that Washington and Moscow may agree on coordinated US-Russian military action against jihadist groups al-Nusra and the Islamic State in Syria.

"But, as we've said before, we continue to explore options, alternatives and proposals with respect to the fight against Nusra and Daesh in Syria," he said.

"But there's no military coordination going on now."

There was no word as to who Kerry will meet in Moscow on Thursday and Friday, but on previous such trips, he has met with Foreign Minister Sergei Lavrov before heading to the Kremlin to see President Vladimir Putin.

Russian forces are in Syria to support President Bashar Assad's regime in its five-year-old civil war against a variety of rebel forces, whereas a US-led coalition is focused on fighting the Islamic State group.

Washington has repeatedly urged Moscow to pressure its ally into agreeing on a ceasefire with so-called "moderate" guerrillas and to enter peace talks to end the civil war, but fierce fighting has continued.

Kerry's trip to Moscow come as part of a six-day, five-nation itinerary that will see him celebrate Bastille Day in France on July 14 before heading to Russia, Luxembourg and Belgium.

In London on July 18, he is slated to attend multilateral talks on the crises in Yemen and Syria but he will also be the first senior US official to visit after the new prime minister, Theresa May, is sworn in this week.