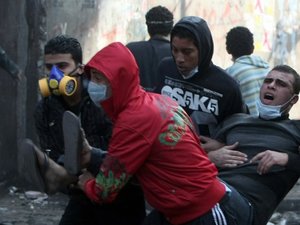 Members of Egypt's ruling military council on Thursday rejected calls to step down immediately, saying it would amount to a "betrayal" as anti-military protests entered their seventh day.

"The people have entrusted us with a mission and if we abandon it now, it would be a betrayal of the people," said General Mukthar al-Mulla, a member of the Supreme Council of the Armed Forces which took power when veteran president Hosni Mubarak was ousted in February.

"Our goal is not to leave power or to remain in power, but it's to implement our commitment to the people," Mulla told reporters.

He confirmed that the first elections since Mubarak's ouster will go ahead on schedule on Monday.

Another member of the SCAF, Mamdouh Shahine, said that "if we leave power in the current circumstances that means the only pillar of the state will crumble."

The news conference comes after days of clashes in Cairo's Tahrir Square and other provinces demanding an end to military rule, that have left at least 38 people dead.

The ruling military said it was committed to holding presidential elections before the end of June 2012, which will see power transferred to a civilian authority.

If it is not have been Iran that have prepared the revolters with thousends of gas mask, who otherwise could be able to deliver such a lot of mask that normally is imposible to fined in the daily market because it is not a daly item for wich there colould be a big demand!
please forward this veiwpoints!
I am an Iranian