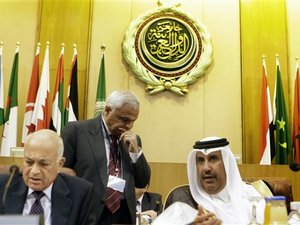 The Arab League on Thursday served a new ultimatum on Damascus, giving it less than 24 hours to allow monitors into the country or face sanctions, while for the first time calling on the United Nations to help resolve the crisis.

The ultimatum, issued at the end of a crisis meeting of Arab foreign ministers in Cairo, came amid an explosion of violence in Syria in which 32 people died, including 11 security force members and seven military pilots.

Long resistant to drawing the international community into the Syria crisis, the Arab top diplomats agreed to ask U.N. Secretary General Ban Ki-moon "to take all measures to support the efforts of the Arab League to resolve the critical situation in Syria."

The Arab body's chief, Nabil al-Arabi, said the 22-member bloc has invited Syria to sign an agreement in Cairo on Friday at 1:00pm (1100 GMT) that would allow observers into the country to monitor the situation on the ground.

Finance ministers will meet on Saturday to vote on sanctions should Syria fail to sign.

Arab foreign ministers said sanctions would include suspending flights to Syria as well as freezing financial transactions with its central bank and commercial deals with the government except for basic goods.

The sanctions could also include freezing the financial assets of the Damascus government.

The United States and European Union have already imposed strict economic sanctions on Syria, where the United Nations estimates more than 3,500 people have been killed since March as the regime cracks down on a popular revolt.

Arab sanctions could sound the death knell for the country's economy which depends on its Arab neighbors for half or its exports and a quarter of its imports.

"If that is to happen, it will be very unfortunate because the damage will be to all sides," Economy Minister Mohammed Nidal al-Shaar told Agence France Presse in an exclusive interview.

They've been reporting over 3500 killed for the last 3 weeks - I thinks is now way past that figure - somewhere in the vincinity of 5000 killed!

secondly, why is the impotent league waiting until friday to impose sanctions - they shoudl be imposing sanctions immediately - to be lifted once a new regieme is in place!

what happenned to peaceful revolution (LCN)??? 7 pilots dead
watch who you sleep with

i could not give a shit how many died,the only thing im concerned with is that it is not in the millions yet.

The AL is losing credibiity as it keeps postponing real action. The recent events in Egypt seem to be overshadowing those in Syria, and affecting the AL actions. They must be asking themselves, why sanctions on Syria and no sanctions on Egypt? Let us see what the AL will do on Saturday.

The Arab league is giving a political shield for Russia and China to hide behind. The deal on ASSad and Syria is final. The Russians and Chinese will vote for limited no-fly, no-go zones, and economic sanctions. The Syrian opposition has struck a deal with Russia.