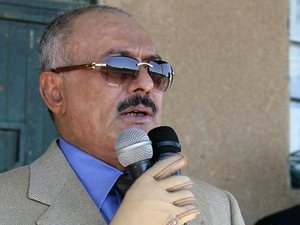 Yemeni President Ali Abdullah Saleh ordered a probe after his loyalists killed five people in Sanaa on Thursday, a day after he signed a deal to immediately hand all "necessary" powers to his deputy.

Saleh, condemning the violence, "ordered the interior ministry to carry out a full investigation" and "bring those responsible for this crime to justice, whatever party they belong to," the state Saba news agency reported.

He signed a Gulf-brokered deal on Wednesday under which he was to hand all "necessary constitutional powers" to implement it to Vice President Abdrabuh Mansour Hadi with immediate effect and hold office on an honorary basis only for the coming 90 days.

Loyalists of Saleh, who has been in power for three decades, shot dead at least five people in Sanaa on Thursday and wounded 34, medics said.

"Yesterday he signs the agreement and today he issues orders. In what capacity is he giving orders?" asked Walid al-Ammari, a spokesman for the youth activists.

"We will continue until we have toppled the rest of the regime," he said. "We did not start a revolution to keep half of the killers."

Hadi, Yemen's low-profile vice president for the past 17 years, is "just another arm of Saleh," Ammari said.

The shooting by gunmen in plain clothes came as tens of thousands gathered for a mass protest against promises of immunity from prosecution for Saleh and his family under the U.N.-backed accord signed with the parliamentary opposition.

The five were all gunned down by live rounds, said medics at a field hospital set up by protesters in Sanaa's Change Square, where they have been camped out since February.

An Agence France Presse correspondent said the anti-regime protesters came under fire as they marched towards the city center, with the demonstrators blaming the attack on Saleh's "thugs."

Activists behind 10 months of protests had called for a huge protest rally against the promises of immunity under the deal which the veteran president finally signed in Riyadh after months of prevarication.

The protesters also chanted slogans against the Common Forum parliamentary opposition bloc led by the Islamist party Al-Islah which was the first to sign up to the plan drawn up by impoverished Yemen's wealthy Gulf neighbors.

"Common Forum, Islah, leave after the assailant," they shouted, referring to Saleh who is expected to travel straight from the Saudi capital to New York for medical treatment.

The 69-year-old sustained serious blast wounds in a June bombing of his residence and has already received extensive treatment in Saudi Arabia.

After the latest killings, the marchers returned to Change Square as pro- and anti-Saleh gunmen deployed across the capital, sending tensions soaring, residents said.

In Yemen's second-largest city Taez, another center of the protests against Saleh, "hundreds of thousands" took to the streets on Thursday with similar demands, organizers said, without reporting any early clashes.

The youths, as the driving force of the protest movement in the face of a bloody crackdown that has left hundreds dead since January, are demanding Saleh and his family face prosecution and that the whole regime be dismantled.

Wednesday's agreement provides for Hadi to assume "all powers necessary ... for organizing early elections within a 90-day period."

The opposition is to nominate a candidate to head a government of national unity charged with holding talks with the youth activists.

World leaders including those of the United States and Italy have called on both sides in Yemen's protracted power struggle to seize on the opportunity of the Riyadh agreement to end the bloodshed.

"For 10 months, the Yemeni people have courageously and steadfastly voiced their demands for change in cities across Yemen in the face of violence and extreme hardship," said U.S. President Barack Obama.

"The United States urges all parties to move immediately to implement the terms of the agreement, which will allow Yemen to begin addressing an array of formidable challenges and chart a more secure and prosperous path."

Saleh's long equivocation over signing the Gulf transition deal saw the protests slide into deadly clashes between loyalist and dissident troops and tribesmen that have riven the capital and left the armed forces deeply divided.

But two major army divisions -- one in Sanaa and one in Taez -- rallied to the opposition and have fought repeated battles against Saleh's loyalists, leaving scores dead.

Hadi is charged with forming a committee to oversee a restructuring of the security forces in the first three months of the agreement.