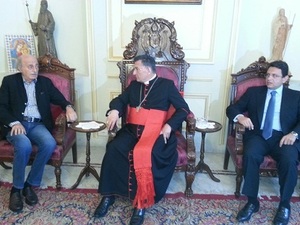 Progressive Socialist Party leader MP Walid Jumblat stressed Monday from Bkirki that exerting efforts to reach a “settlement” over the stalled presidential vote is “more important” than focusing on candidates.

After talks with Maronite Patriarch Beshara al-Rahi, Jumblat said he visited the patriarch to ask him to “bless the completion of the renovation of the Our Lady Church in Mukhtara.”

“This year we will mark the 15th anniversary of the (Druze-Christian) reconciliation that was sponsored by patriarch Nasrallah Sfeir, and we hope this reconciliation applies to entire Lebanon,” Jumblat added.

Asked whether he discussed potential presidential candidates with al-Rahi, Jumblat noted that “exerting efforts to reach a presidential settlement is more important than proposing candidates.”

Lebanon has been without a president since the term of Michel Suleiman ended in May 2014 and Hizbullah, MP Michel Aoun's Change and Reform bloc and some of their allies have been boycotting the parliament's electoral sessions, stripping them of the needed quorum.

Al-Mustaqbal Movement leader ex-PM Saad Hariri launched an initiative in late 2015 to nominate Marada Movement chief MP Suleiman Franjieh for the presidency but his proposal was met with reservations from the country's main Christian parties as well as Hizbullah.

Hariri's move was followed by Lebanese Forces leader Samir Geagea's endorsement of his long-time Christian foe Aoun for the presidency after a rapprochement deal was reached between their two parties.

The Taif Agreement robs the Shi3as to give to the Christians.

zoulfiquar.
You mean liike Iran robs Lebanon to give it to its proxy militia HA?