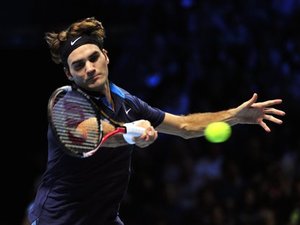 Roger Federer finished the group stage at the ATP World Tour Finals with a perfect record after beating Mardy Fish 6-1, 3-6, 6-3 Thursday for his third win at the season-ending tournament.

Federer started the match with the same kind of ruthless efficiency that helped him beat Rafael Nadal in just one hour on Tuesday, breaking Fish three times in the first set.

The Swiss star's accuracy and energy levels dropped in the second, but he immediately took control of the decider by breaking the American for a 2-0 lead and lost just two points on his serve the rest of the way.

In the late match, Nadal was set to play Jo-Wilfried Tsonga of France, with the winner joining Federer in the last four.

Fish had already been eliminated after losing his first two matches.