Morocco to Vote with Islamist Party Set for Strong Showing 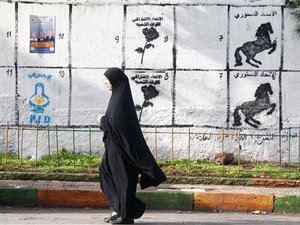 Morocco prepares for an election Friday likely to see a strong showing by a moderate Islamist party, but the poll risks being marred by low turnout with a pro-reform movement calling for a boycott.

The polls are the first since a new constitution, proposed by King Mohammed VI as regimes in nearby countries were being swept away in the Arab Spring uprisings, was overwhelmingly approved in a July 1 referendum.

The amended constitution gives more powers to parliament and the prime minister, who now must be appointed by the king from the party which wins the most seats in the assembly.

Opinion polls are not allowed in the north African kingdom but observers said the opposition Justice and Development Party is likely to win the largest number of seats.

Party officials have said they believe they can win over 100 seats in the 395-seat parliament this time around.

A win would follow a victory by a previously banned party of moderate Islamists last month in Tunisia, the birthplace of the Arab Spring.

Communications Minister Khalid Naciri said there was no risk of Morocco becoming Islamist since no party would be able to capture enough votes to govern on its own and the winner would have to form a coalition government.

"The game has never been this open. The strongest party will not capture more than 16-18 percent of the vote. The formation of a (government) majority will be tough and it is hard to make predictions," he told Agence France Presse.

"Morocco is not Tunisia. There is no Islamist danger. Tunisia has just discovered political plurality," he added when asked if Morocco could become Islamist.

It focused at first on social issues, such as opposition to annual summer music festivals and the sale of alcohol, but has shifted to issues with broader voter appeal like the fight against corruption and high unemployment.

The party promises to cut poverty in half and raise the minimum wage by 50 percent.

Unlike the banned Islamist opposition group Justice and Charity, the Justice and Development Party pledges its allegiance to the monarchy.

Some voters in this nation of 35 million people said they did not plan to cast their ballots because they had no faith that lawmakers would work to improve their lives.

"I am not going to vote and I say it with my head held high," said Aicha, a housewife in the mountain village of Tiddas who declined to give her last name and who wore her hair covered in a black and purple headscarf.

"You vote for someone and then they win, then he goes and he forgets you. We have nothing here. Even the street lights don't work and no one fixes them."

The pro-reform February 20 movement which was responsible for the protests staged just before the king announced his plans to reform the constitution, has called for a boycott of Friday's election.

It argues the constitutional reforms do not go far enough and the elections will only give credibility to an undemocratic regime.

More than a thousand young people who have degrees but are unemployed staged a demonstration in Rabat Thursday, demanding jobs and joining the calls to boycott the vote.

"We are here to call to boycott the elections and draw attention to our demands and our right to work," one demonstrator told AFP.

With authorities concerned about voter turnout, Omar Bendourou, a constitutional law professor at Rabat's Mohamed V University, said they would "do all they can" to ensure turnout is higher than the paltry 37 percent recorded in the last elections in 2007.

"For the powers that be a strong turnout in the 2011 elections would give credibility to the constitutional reform adopted in July," he said.

"And it would give them some credibility, a favorable image abroad of how the kingdom responded to protests."

The king announced he would overhaul the constitution on March 9, just 17 days after thousands of people took to the streets across Morocco calling on him to give up some of his powers in the biggest anti-establishment protests in the country in decades.

While the constitutional reform devolved some of the king's powers to parliament and the prime minister, he remains the head of state and the military and still appoints ambassadors and diplomats.