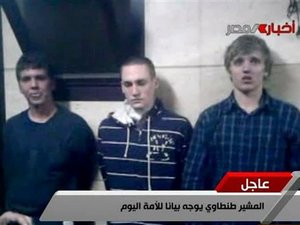 On Wednesday, the prosecutor general ordered the three students of the American University in Cairo be detained for four days.

They had been arrested on Monday along with other protesters at a mass anti-military rally in Tahrir.

Thousands had been converging on the square -- the epicenter of protests that toppled Hosni Mubarak -- to demand the end of military rule and a swift transition to civilian authority.

The suspects had been arrested with a bag allegedly containing water bottle filled with petrol, MENA reported.

Washington said Wednesday it was in "close contact" with Egyptian authorities over the fate of the trio.