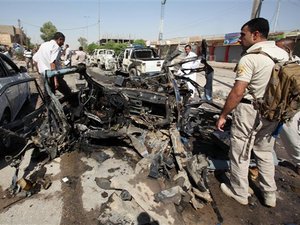 A roadside bomb and a motorcycle bomb exploded simultaneously at about 6:40 pm (1540 GMT) in a market in central Basra, an interior ministry official said.

Following a common pattern in Iraq, a third roadside bomb went off as people gathered at the scene, according to the official, who put toll at 19 killed and 67 wounded.

An army brigade commander and a high-ranking police officer were among the dead, while police and soldiers were also wounded in the blasts, the official said.

Riyadh Abdelamir, the head of the Basra health directorate, said that 19 people were killed and 65 wounded in the blasts.

Army and police deployed in force following the blasts, cordoning off the market, an Agence France Presse correspondent said.

It was the deadliest day in Iraq since October 27, when two roadside bombs in Baghdad's Urr neighborhood killed at least 32 people and wounded 71 others.

On November 2, three motorbike bombings in Basra killed at least nine people and wounded at least 37.

Violence has declined nationwide since its peak in 2006 and 2007, but attacks remain common. A total of 258 people were killed in October, according to official figures.