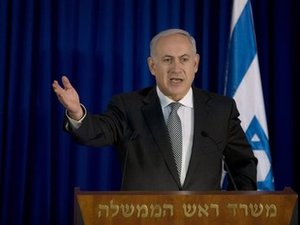 Israeli Prime Minister Benjamin Netanyahu called on Thursday for sanctions to be imposed on Iran's oil and banking sectors to put pressure on it to rein in its controversial nuclear program.

"It is very important that significant economic sanctions were imposed, but that is not enough," he said at a joint press conference with his Romanian counterpart Emil Boc.

"Further effective sanctions must be activated, including on the petroleum industry and Iran's central bank, in the near future," he said.

Sanctions targeting Iran's financial sector were unveiled on Monday by Britain, Canada and the United States, following a report by the U.N. atomic energy watchdog earlier this month that came the closest yet to suggesting Tehran was seeking a nuclear weapons capability.

France separately called for the West to freeze Iranian central bank assets and slap an embargo on Iranian oil.

"The goal of Iran's nuclear program has been the subject of controversy but it is no longer," Netanyahu claimed.

"Iran is vigorously working to achieve a nuclear weapon. This is the threat facing Israel, facing the region and facing the entire world."

Pressure on Iran is likely to be stepped up a notch on December 1, when EU foreign ministers are expected to announce additional sanctions on some 200 Iranian firms and individuals, according to diplomats.

Israel, which has the Middle East's sole if undeclared nuclear arsenal, has long accused Iran of trying to develop atomic weapons under cover of its civil nuclear program.

Tehran strongly denies the charge and has accused Israel of trying to sabotage its civil nuclear program and kill its nuclear scientists.

A defiant Iran insisted on Wednesday that it would not back down on its right to develop nuclear technology for peaceful medical and power generation purposes despite the newly announced Western sanctions.

"The Iranian nation will not back down an iota, and will not allow the slightest move to encroach on the nation's rights," President Mahmoud Ahmadinejad said in a speech aired on state television.