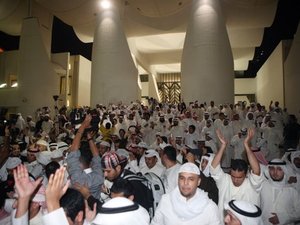 Some 20 Kuwaiti opposition activists detained for storming parliament went on hunger strike on Friday to protest against "illegal and oppressive detention," and maltreatment.

The announcement came in a statement posted on Twitter by the activists' supporters immediately after the public prosecutor extended the detention of 31 activists until Saturday for further investigation.

The public prosecutor decided to "detain the 31 activists until late Saturday to resume interrogations," al-Humaidi al-Subaie, coordinator of the opposition defense team, said.

Subaie said on Thursday that the activists were being questioned on charges of damaging public property, storming parliament, illegal procession, and assaulting police and others, for which they "face a jail term of between six months and life."

The Twitter statement claimed that the activists were being improperly detained as they were kept in cells normally used for criminals, prevented from contacting their relatives and were charged collectively.

Hundreds of supporters spent the night outside the palace of justice in Kuwait City in temperatures of eight degrees Celsius (46 Fahrenheit), cold for the Gulf emirate.

They planned to gather again late Friday in a show of solidarity with the detainees.

The detained activists include a former MP, academics, doctors and writers.

Ahmad al-Thayedi, the first university professor to be detained in the case, told Agence France Presse minutes before handing himself in on Thursday that the "whole issue has been politicized."

Hundreds of opposition activists stormed the seaside parliament building on November 16 after clashes with riot police that followed a large protest demanding the resignation of the prime minister and the dissolution of parliament.

The oil-rich emirate has seen mounting tension between the government, which is dominated by members of the ruling al-Sabah family, and the opposition.

The opposition bloc of 20 of the 50 members of parliament called on Thursday for Interior Minister Sheikh Ahmed al-Humoud al-Sabah to resign over police beating of activists.

The opposition has also accused Prime Minister Sheikh Nasser Mohammed al-Ahmed al-Sabah, a senior member of the ruling family, of transferring public funds into his overseas bank accounts. The government has denied the charge.