Hamas to Focus on Popular Resistance 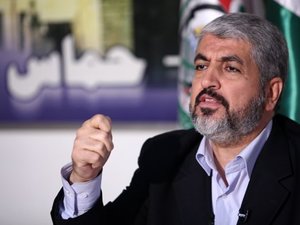 Hamas is looking to focus its energies on popular resistance without giving up its right to wage armed struggle against Israel, the Islamist movement's leader Khaled Meshaal told Agence France Presse in an interview.

"Every people has the right to fight against occupation in every way, with weapons or otherwise. But at the moment, we want to cooperate with the popular resistance," the group's Damascus-based leader said in the interview late on Thursday.

"We believe in armed resistance but popular resistance is a program which is common to all the factions," he said.

The Islamist movement, which rules the Gaza Strip, has long called for the destruction of the Jewish state and has fiercely defended its right to wage a bloody armed struggle to end the occupation.

Meshaal's comments were made just hours after he held top-level talks with Palestinian president Mahmoud Abbas, who heads the rival Fatah movement, in a bid to cement a stalled reconciliation agreement between the two groups.

Speaking to reporters in Cairo, the two leaders approved a two-page document reiterating their commitment to the main elements of the original deal, which was signed in May, and hailed a new era of "partnership" between their two factions.

The document, a copy of which was seen by AFP, outlines an agreement to observe a truce in the West Bank and Gaza Strip along with "the adoption of popular resistance which is to be to be strengthened" to oppose Jewish settlement building and construction of the West Bank barrier.

"This resistance will be increased and organized and there is to be an agreement on its style, on greater efficiency and the formation of a framework to direct it," it said.

Meshaal did not go into detail about the focus on popular resistance but said he had instructed the movement's leadership in Gaza and Damascus, to "adopt a political line and one with the press that doesn't upset the conciliatory spirit and that truly reflects the atmosphere of reconciliation”

"I asked them to take practical and positive measures to flesh out this agreement."

It would be a mistake for Abbas to trust this thug, Hamas is only agreeing to all of this because they know their end is drawing near since their main sponsor the Iranian criminal regime is on the ropes already, they would say whatever and would reneg on all their commitments once they think they are strong enough to elliminate Abbas such is the attitude of all criminals and outlaws, this is precisely what the terrorist Iranian militia HezbEbola is trying to do with the free Lebanese, just like a parasite that lives off sucking the blood of its host (in this case the countries) goes into hibernation mode only to come back and finish the job when it's "healthy" enough.Criminals and terrorists belong behind bars and nowhere else, certainly not in governments.

Just take a look at this one footage of many that shows the love that Hamas zombies have for their fellow palestinian "brothers" http://www.youtube.com/watch?v=I1M4eH9Kk7I

This is what Iranian zombification and incitement does...