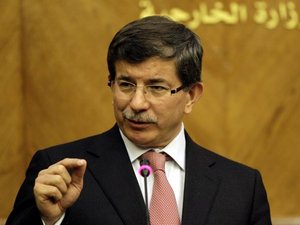 A new Arab League ultimatum which gives Syria until later Friday to agree to accept observers or face sanctions represents a last chance for the regime in Damascus, Turkey's foreign minister said.

"It is a last chance, a new chance for Syria," Ahmet Davutoglu told reporters in Istanbul in the final hours before the 11:00 GMT deadline.

"We think it is now vital to put an end to the suffering of the Syrian people," said Davutoglu at a joint press conference with his Jordanian counterpart Nasser Judeh.

Turkey's Prime Minister Recep Tayyip Erdogan and Jordan's King Abdullah have both called on their neighboring leader Assad to quit over a crackdown on protesters which the United Nations says has left more than 3,500 people dead.

The Arab ultimatum was issued Thursday at the end of a crisis meeting of foreign ministers in Cairo, during which the 22-member bloc also for the first time called on the United Nations to help resolve the crisis.

Thus spoke Zaratoglu! What era do these fine Turks think they are living in? Ultimatum, huh!

It is the end of the line Bashar. Phase two is on the way.

Assad is finished...and all his lebanese (i mean syrians) dogs in our country will soon pay the price of their betrayal to our country.

"soon a new Syria will emerge and will help the lebanese state clean up the baathist and iranian garbage". The Syrian people will not help the pro-American Lebanese slaves. The New Syria will wage a war with Israeli occupiers with the support of the Lebanese anti Israel resistance no matter who they are.