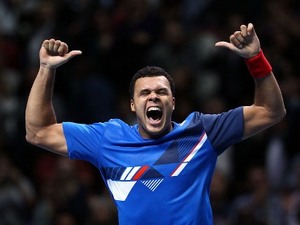 Whatever Rafael Nadal tried to throw at Jo-Wilfried Tsonga at the ATP World Tour Finals on Thursday, the Frenchman always appeared one step ahead.

Now Nadal is hoping he hasn't left his passion for the game behind him.

Tsonga qualified for the semifinals at the expense of Nadal, beating the second-ranked Spaniard 7-6 (2), 4-6, 6-3 in a decisive round-robin match to join Roger Federer in the last four of the season-ending tournament.

Nadal — who suffered his worst loss ever to Federer in a 6-3, 6-0 defeat Tuesday — subsequently acknowledged that his motivation and desire has been lacking since losing the U.S. Open final to Novak Djokovic in September. Nadal has not won a title since then, losing his only final to Andy Murray in Tokyo.

"I was little bit less passionate for the game probably, because I was a little bit more tired than usual," Nadal said. "To compete I wasn't in the right way."

Against Tsonga these days, you need to be.

The tall Frenchman used his powerful ground strokes to dictate play against Nadal, and tried to speed up rallies by using a serve-and-volley approach that the Spaniard struggled to counter.

"Jo knows where I hit every ball during the point," Nadal said. "I didn't have a surprise shot during all the match. So that's very difficult at this level."

Nadal still plans to play in the Davis Cup final against Argentina in December — an event that usually brings out his best and gives him a chance to end 2011 on a high note.

But he acknowledged that the end of the year "wasn't easy for me." Nadal won his sixth French Open title in May but continually saw himself bested by Djokovic, who won the other three Grand Slam titles and took over the No. 1 ranking.

But Nadal said he isn't letting himself get frustrated by the Serb's dominance over him.

The win gave Tsonga a 2-1 record in group play while Nadal fell to 1-2 in Group B. It is the first time Tsonga has reached the semifinals of the event, while Nadal missed out for the second time in five appearances.

Federer beat America's Mardy Fish 6-1, 3-6, 6-3 earlier to finish the group stage undefeated at 3-0. David Ferrer of Spain has also qualified for the semifinals from Group A, with top-ranked Novak Djokovic and the Czech Republic's Tomas Berdych in contention for the last spot going into the final group matches on Friday.

In perhaps the hardest-fought match of the tournament so far, Tsonga broke twice in the third set to go up 5-2. But he faltered in the next game, double-faulting three times to give Nadal renewed hope, only to bounce back and break the Spaniard to love. He sealed the win with a hard forehand winner.

"Tonight I just played, well, amazing tennis," Tsonga said. "I was really aggressive. I had a good percentage on winners. I put a lot of pressure on him today."

Tsonga often dictated the early rallies with his powerful groundstrokes and earned the only two break points of the first set by taking a 15-40 lead in the fourth game. Nadal saved the first by challenging a call in the middle of a long rally when he correctly judged that Tsonga's shot was long, and hit a service winner on the second.

Tsonga dominated the tiebreaker, however, winning the last five points and hitting an ace on his first set point.

Nadal earned the first break of the match when Tsonga served at 5-4 in the second to force a decider. But the Frenchman soon took charge in the third, breaking for a 2-1 lead with a delicate drop shot that Nadal could only return into the net. Nadal then netted an easy forehand to go down 5-2, hanging his head in despair, and couldn't fight back despite Tsonga handing him the next game.