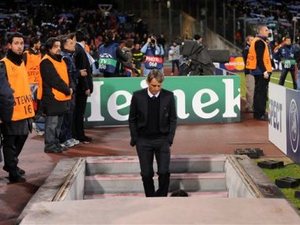 Manchester City manager Roberto Mancini says his team of international stars has no chance of winning the Champions League — even if the Premier League leaders manage to scrape through their group on the final matchday.

After losing 2-1 at Napoli on Tuesday, City must defeat Bayern Munich at home on Dec. 7 and rely on the Italian side failing to beat already eliminated Villarreal to snatch a top-two finish in Group A.

Even if that unlikely scenario materializes, Mancini believes his star-studded side won't go on to capture European club football's biggest prize.

Mancini says "I don't think we've a team to win the Champions League this season. Real Madrid, Bayern Munich, Barcelona and Inter Milan all have more experience than us."