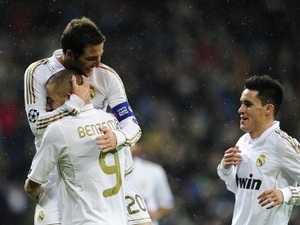 Real Madrid coach Jose Mourinho said on Friday that he was happy to have a headache over whether to field Karim Benzema or Gonzalo Higuain in Saturday's derby with Atletico Madrid.

The strike duo were paired together for the first time this season in the 6-2 Champions League humbling of Dinamo Zagreb on Tuesday, with Benzema scoring twice and Higuain also on target.

Both players are in fine form this season, Benzema having scored seven league goals and four in the Champions League, while Higuain has 11 strikes to his name in La Liga and one in European competition.

"It's true that, when they're both on top form as they are at the moment, it gives me a few problems, but so much the better," said Mourinho.

"I'm happy to have this doubt between Benzema and Higuain. I hope to have the same problem until the end of the season.

"I have the two best strikers in the world."

Mourinho will be able to call upon both Argentine winger Angel di Maria and Brazilian left-back Marcelo for the visit of Atletico, after both overcame thigh injury problems.

"Kaka isn't ready yet, but he'll be back soon," said Mourinho. He's still feeling his injury, even though he's now over it."

Portuguese center-back Ricardo Carvalho is also unavailable as he continues his recovery from a back problem that has kept him on the sidelines for two months.

Real go into the game against ninth-placed Atletico three points clear of defending champions Barcelona at the top of the La Liga table after 12 games.