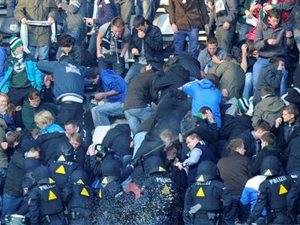 At a time when Germany is playing its best football in years, the organization behind it is trying to tackle problems threatening to tarnish its image.

Referees under probe by tax authorities and the plague of fan violence, especially in lower-tier leagues, are keeping the football federation busy half a year before Germany goes to the European Championship as a favorite for the title.

The DFB has slapped an unprecedented one-season ban on second-division club Dynamo Dresden from the German Cup after its fans rioted at a match one month ago at Borussia Dortmund. The violence left dozens injured, 15 arrested and €150,000 ($200,500) worth of damage at Dortmund's stadium as seats were ripped off and food kiosks and toilets were vandalized.

While Dynamo considers the punishment excessive, the chief judge of the DFB's disciplinary panel said it did not want to leave the impression of being too lenient and pointed at the statistics.

At last season's games in the top two divisions, there were 846 injured people, a 12-year high.

"We haven't had deaths yet. But if this (violence) continues, it's only a matter of time before we have the first ones," judge Hans Lorenz said.

Testifying before the panel, Dortmund police chief Peter Andres said the clashes even before the game resembled "civil war conditions."

"There would have been a bloodbath if we had acted harsher," Andres said.

Lorenz said Dresden fans were repeat offenders. The club had been punished 28 times and warned 16 times since 2002. He said banning clubs from competitions was effective as demonstrated when English clubs were suspended from Europe after the 1985 Heysel disaster in Belgium.

Last weekend, at least 13 people were injured at the second-division match between Hansa Rostock and St. Pauli. The game was interrupted when rival fans fired flares at each other.

Although flares, firecrackers and similar are banned from German stadiums, they are frequently smuggled in and used by rival fans against each other or to be thrown onto the field.

Also, a Nuremberg fan lost an arm after being hit by a train following an altercation with opposing supporters at a station.

The 19-year-old man was among fans returning from Nuremberg's 4-0 loss at Schalke on Saturday when they became involved in a conflict with Mainz supporters at Cologne train station. He is thought to have fallen in front of an oncoming high-speed train. Emergency surgery failed to save his right arm.

A woman was injured recently in a similar incident after heavy clashes in Frankfurt at another German Cup game.

"Anyone that feels a bond with football wants peaceful football occasions in and around German stadiums. Sport should be the focus of attention in every rivalry," Bader said.

"We want the clubs to try harder to keep violence-prone fans from stadiums," Friedrich told the German news agency dapd.

All professional clubs in Germany have officials in charge of taking care of the fans.

Sports scientist and researcher Gunter Pilz said the fans themselves have to do more to flush the rowdies from their ranks.

While dealing with violence, the DFB also has been rocked by a tax probe and the suicide attempt of one of its top referees.

Babak Rafati was found bleeding in his hotel bathtub two hours before he was due to take charge of a game between Cologne and Mainz last Saturday.

Rafati's lawyer says his 41-year-old client was suffering from depression, the latest football personality to acknowledge publicly be affected by the illness since the suicide of Hannover goalkeeper Robert Enke two years ago. Several players and former Schalke coach Ralf Rangnick have sought treatment recently.

Lawyer Sven Menke said that "growing pressure to perform for him as a referee and the media pressure linked to that — in combination with the constant fear of making mistakes — became a bigger and bigger burden."