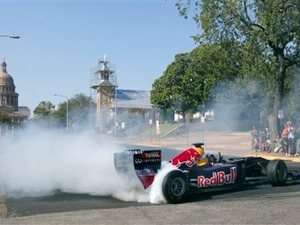 Formula One boss Bernie Ecclestone says he is "not really" optimistic about the U.S. Grand Prix taking place next year and has set American organizers a Wednesday deadline to guarantee its long-term financial backing.

Organizers for the proposed race in Austin, Texas, say they have agreed to pay the sanctioning fee to secure a spot on next year's F1 calendar, but that's not enough for Ecclestone.

Speaking Thursday at the Brazilian GP, Ecclestone says "they might pay something now but it's the future we are looking for, we are not looking for (a) short term" solution.

He also says he's "confident" the Bahrain GP will be back on the calendar next season and that it "should have been there this year."