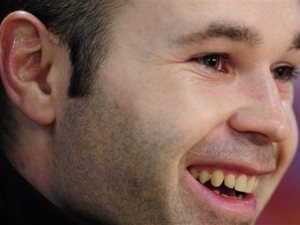 Iniesta skipped Wednesday's 3-2 Champions League victory at AC Milan with a bruised left thigh, and coach Pep Guardiola left the Spain international out of Friday's squad for the trip to the Spanish capital.

Guardiola says the injury is not serious but with a hectic December schedule that includes a match at Real Madrid and the Club World Cup "we preferred to wait than rush him back."

Brazil fullback Adriano was included in the team after recovering from a leg muscle injury.