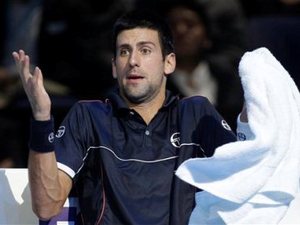 Novak Djokovic is in danger of being eliminated early from the ATP World Tour Finals after losing to fellow Serb Janko Tipsarevic 3-6, 6-3, 6-3 Friday in their final round-robin match.

The loss means the top-ranked Djokovic fell to 1-2 in group play and will miss the semifinals if Tomas Berdych beats David Ferrer in the late match, with the Spaniard having already advanced. Berdych would join Ferrer, Roger Federer and Jo-Wilfried Tsonga in the last four with a win.

Djokovic again looked far from the player who was practically unbeatable for much of 2011, and the season that saw him win three Grand Slam titles and seize the No. 1 ranking from Rafael Nadal may well have ended with a dud.

He was broken twice in each of the last two sets, and sent a forehand into the net on Tipsarevic's third match point.