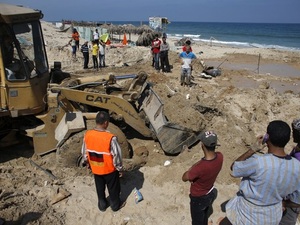 The Israeli army on Monday destroyed the home of a Palestinian in the occupied West Bank, after he killed a 13-year-old girl as she slept in her bed, a military spokeswoman said.

Mohammed Nasser Tarayra, 19, broke into a house in the Kiryat Arba settlement near Hebron in the southern West Bank on June 30.

He stabbed American-Israeli Hallel Yaffa Ariel dozens of times while she slept, before being shot dead by settlement guards.

A video posted by the army online Monday showed dozens of troops laying charges in the building in the dead of night before carrying out a controlled explosion.

Israel frequently destroys the homes of Palestinians who have carried out attacks.

Critics of the policy denounce it as a collective punishment, which leaves the families of attackers homeless, but the Israeli government says it discourages others who might be thinking about carrying out similar acts.

Since October, 219 Palestinians, 34 Israelis, two Americans, an Eritrean and a Sudanese have died in violence in Israel, the Palestinian Territories and Jerusalem, according to an AFP tally.

Most of the Palestinians killed were carrying out knife, gun or car-ramming attacks, Israeli authorities say.

What did they expect - a medal?