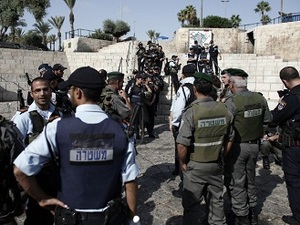 The firefight erupted on Thursday evening after officers entered Nablus's Old City, a densely populated warren of alleyways that was one of the flashpoints of the second Palestinian uprising between 2000 and 2005.

Nablus governor Akram Rajub said that two police had been killed in the operation as well as two gunmen, both of whom he said were on a police wanted list.

Under the 1993 Oslo accords with Israel, Palestinian police are only authorised to operate in 18 percent of the occupied West Bank, encompassing most of the major Palestinian towns, including Nablus.

The northern West Bank has seen a number of Palestinian police raids in recent months. The area has witnessed factional infighting within the ruling Fatah movement of Palestinian president Mahmud Abbas.

If this is a completely internal Palestinian matter in Nablus, why are you showing a scene in Jerusalem with Israeli police? Don't the Palestinian police allow you to photograph them?