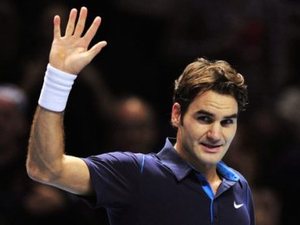 The showpiece, season-ending match at London's O2 Arena will be Federer's 100th final and he got there by beating David Ferrer 7-5, 6-3 in Saturday's semis, making it 12 wins from 12 matches against the Spaniard.

Tsonga booked his place by downing Tomas Berdych of the Czech Republic 6-3, 7-5 to set up a rematch against Federer, who beat the Frenchman 6-2, 2-6, 6-4 last Sunday in the opening round-robin match of the event.

Federer, unbeaten in 16 matches after collecting titles at Basel and Paris prior to the O2, can become the record-holder in terms of World Tour Finals should he win his sixth on Sunday.

He is also guaranteed to move above Andy Murray and finish the season in third place in the world rankings whatever the result in the final.

It was not a vintage display from Federer against Ferrer, but once he had secured the crucial break in the 11th game to take the first set he was always in control.

The 30-year-old, who shares the current record of five titles with Ivan Lendl and Pete Sampras, said: "I'm very happy to have played so well again. That's what it takes to beat David, he's had an amazing season and an amazing tournament. He can still win the Davis Cup next week so I hope he does that."

Tsonga, 26, the sixth seed, said it was "incredible" to have made the final, in a contest where the three top seeds -- Novak Djokovic, Rafael Nadal and Murray -- had gone out before the semi-final stage.

"For me, it's already an amazing week and I will enjoy this final and try to play my best tennis against Roger," he said.

"It's very good for me. I've played well the second part of the year and now I'm here at the end of the season and I did a lot of sacrifices, I worked a lot to be here so I'm really happy."

Ferrer returned to the court less than 16 hours after the end of his Group A loss to Berdych on Friday.

Federer had enjoyed the luxury of a day off but he seemed to be feeling the pressure and was snatching at shots and making a host of unforced errors.

He survived a game of five deuces serving to stay in the set at 4-5 and in the next game the Swiss moved up a level, winning a fine rally to force two break points, taking the second when Ferrer overcooked a forehand.

That should have been a weight off Federer's shoulders and he served out the set with relative ease.

The Swiss then made the perfect start to the second, his forehand suddenly looking much more secure as he extended his winning streak to four games with a return thumped down the line.

Ferrer stopped the rot by holding for 1-2 with a scrambled backhand winner that said everything about the Spaniard's tenacity.

He then saved two breaks to stay just about in the match but it was all over when Federer broke again in the final game, his attacking play finally overwhelming Ferrer.

Tsonga said he had to overcome the nerves to win his semi-final. It is his best achievement after reaching the 2008 Australian Open final.

"I was really tight, the first time I was tight like this in my career," he said.