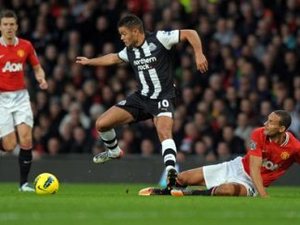 Rio Ferdinand was judged to have brought down Hatem Ben Arfa after 61 minutes although television replays suggested the England defender had been hard done by as referee Mike Jones consulted with his assistant Flynn before awarding the spot kick.

Demba Ba stepped up to convert the penalty, cancelling out Javier Hernandez's opener and leaving United four points behind leaders Manchester City, who play their game in hand at Liverpool on Sunday.

Ferguson let his feelings be known on the decision and his comments were hastily edited and went unaired by the club's in-house television station MUTV.

But the United manager had already appeared on rival outlets, voicing a view that is bound to be looked upon dimly by the FA.

"I didn't think anyone in the ground thought it was a penalty apart from the assistant referee," said Ferguson. "The referee thought it was a corner. He was nearer to it. He was only eight yards away.

"The problem is that the referees are full-time and the linesmen are not, and whether he ever gets a game again, the assistant referee, is not for me to decide but it was an absolutely shocking decision.

"It costs you. Two years ago when the linesman gave the offside goal against Chelsea it cost us the league, so hopefully we're not saying that at the end of May.

"I know what everyone's view was, including the referee's. He said he thought Ferdinand touched it and won the ball and he gave a corner kick. But he let the linesman overrule him.

"You knew that right away. We had a situation a few weeks ago when the linesman gave a penalty kick for handball but the referee knew what to do and overruled him. That's what the referee should have done today.

"You give Newcastle credit, but we made so many chances you think it’s not going to be your day."

With City playing 24 hours after United kicked off against Newcastle, United wasted the opportunity to cut their lead to two points although Ferguson insisted that his team's attacking play was so impressive that he had no concerns about the title race.

"It's disappointing not to put pressure on City but if we play like that every week I'll be happy," he said.

"It was a fantastic performance by us, the chances we created. Chicharito (Javier Hernandez) had four clear-cut chances in the first half and the second half was just an onslaught. Not to get the three points was a travesty.

"It's not a concern playing like that, most of the time we would have scored three or four in that game. It was just an incredible result."