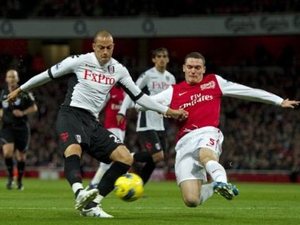 Arsene Wenger is expected to make changes to his starting line-up for the League Cup this week after admitting tiredness played a part in dropping points against Fulham.

Thomas Vermaelen earned a 1-1 draw at the Emirates Stadium with his late header, after scoring an own goal to open the scoring in the Premier League clash.

Wenger believes his squad had not fully recovered from their midweek Champions League win over Borussia Dortmund when they booked a place in the knockout stages of the competition.

"It was the sharpness of our mind, mental fatigue and physical fatigue," explained the Arsenal manager.

"Many players were on the fringe and had now completely digested the Champions League game.

"Wednesday to Saturday afternoon is short, the shortest you can get - but it’s not an excuse. It’s an explanation. We want to be in the Champions League so you cannot cry when you are tired.

"Our challenge is to win these types of games even when we are tired."

Arsenal face Manchester City next in the League Cup quarter-final on Tuesday, with Wenger ready to rotate his squad as they look to extend their unbeaten run to 11 matches.

"Of course we are disappointed but overall we are still improving and hopefully we can show that again on Tuesday," he said.

"I will have to change the team because some players are on the fringe, muscular-wise."

Vermaelen put through his own net when he tried to clear the danger after John Arne Riise was found in the penalty area. He then headed home eight minutes from full-time from Theo Walcott’s cross.

"I believe he scored unfortunately because left-footed players refuse to use their right," Wenger said. "But he showed character. He senses the ball well and reads the game.

"The positive is that we have shown exceptional spirit and desire. Circumstances went against us, when they scored they didn’t cross the halfway line. It’s disappointing because we dropped two points but our unbeaten run goes on."

Wenger believes his team would have lost this game to Fulham if they were playing earlier in the season, when Arsenal were struggling for confidence.

"We could have lost this game earlier in the season," he said. "I felt you have to give credit to Fulham, they played well and their goalkeeper played well."

Fulham midfielder Moussa Dembele earned the man-of-the-match award and manager Martin Jol is confident he will keep the player at the club when the transfer window reopens.

The Dutchman said: "Moussa is happy with us. He has to develop a few qualities. He has quality on the ball and will develop others and become more efficient. He knows that.

"He showed against Arsenal and at the Emirates Stadium, what a player he is.

"If you go away from home and one of your players is man of the match it is always good. He is a gifted player."