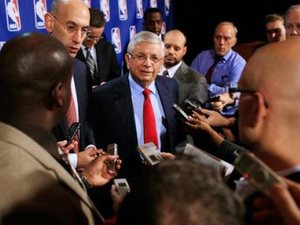 A tentative agreement to end the NBA's crippling lockout and save the season will have owners and players scrambling to get the details in place in time for a star-studded Christmas tip-off.

"There is a lot of work to be done in a lot of places, with a lot of committees and player groups and the like, but we are optimistic that it will hold and we will have ourselves an NBA season," NBA commissioner David Stern said as he and players' association executive director Billy Hunter sat wearily side by side around 3:00 am on Saturday to announce the handshake agreement.

After months of wrangling between billionaire owners and millionaire players left fans soured, news that the sides had agreed on a framework for a deal even caught the attention of US President -- and basketball fan -- Barack Obama, who gave a "thumbs up" signal and said "Good deal" when asked about it.

Some players sounded euphoric as they took to Twitter.

"Man I just got up not to long ago and see we have a deal! I feel like my kids on X-mas day! So juiced!!" Miami Heat star LeBron James tweeted on Saturday morning. "Excited for the fans that stayed patient with us!"

However, plenty of work remained to formalize what Stern described as a "tentative understanding" that was hammered out in a 15-hour marathon meeting.

A detailed agreement must be put in writing and ratified by NBA club owners and by the more than 430 members of the NBA players' association.

The ratification process for the players is complicated by the fact that they disbanded their union when talks last broke down on November 14 and launched an anti-trust lawsuit against the league.

At the time Stern dismally predicted that move could portend a "nuclear winter" for the league, which launched its own court case to prove the legality of the lockout.

Now the players must withdraw their lawsuit and re-form the union in order to vote on the deal.

Hunter said progress had already been made on the steps to end the court cases.

"We're happy that we've been able to reach a tentative litigation settlement with regard to many issues that are pending before the various courts," he said.

The league's labor relations committee was to discuss the agreement on Saturday, and Stern said he expected them to recommend it to owners.

If all proceeds as hoped, training camps and a free agency signing period will open simultaneously on December 9 and a 66-game season will begin on Christmas Day -- 55 days after the normal 82-game season was due to begin on November 1.

In the only prior NBA season shortened in a financial fight, each team played 50 games in the 1998-99 season, which did not start until February after a deal was reached in early January.

The league will have to come up with a revised schedule for both the regular season and the playoffs. Clubs will have to sort out their rosters -- with some moves likely impacted by new salary and signing rules -- and the players who had planned to wait out the dispute competing overseas will have to head home.