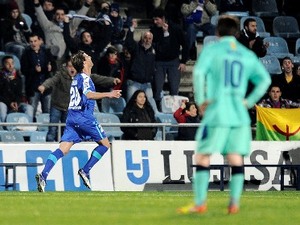 Barcelona crashed to a shock 1-0 defeat at Getafe on Saturday and now trail Real Madrid, who came from a goal down to beat nine-man derby rivals Atletico Madrid 4-1, by six points.

It was the first defeat of the season for the reigning Spanish and European champions as Getafe frustrated their illustrious visitors, grabbing the three points thanks to a second half header from Juan Valera.

In a scrappy game Nikolas Miku shot over for Getafe after 20 minutes and Alexis Sanchez, a surprise inclusion in the Barca starting eleven, was denied by a fine reflex save from keeper Miguel Moya before half-time.

Barcelona continued to press but Getafe surprisingly took the lead with practically their only effort on target in the whole game when Valera, left unmarked, headed in a corner after 67 minutes.

Deep into injury time Lionel Messi had a golden chance to equalize but his shot came back off a post.

Barcelona's last defeat came on April 30 when they lost 2-1 at Real Sociedad while Saturday's drama added an extra edge to the first El Clasico meeting of the season between Real and Barcelona which takes place on December 10.

"It's not a terrible defeat and there is a long way still to go in the season," said Barcelona coach Pep Guardiola.

"We need to recover from the effort which we put in which was very good. Next we play against Rayo on Tuesday, then Levante and then Real Madrid.

"We played a good game against a good side. They are a team which have strong players so it was always going to be a difficult game."

Real beat a robust Atletico with the game turning on the first half dismissal of keeper Thibaut Courtois and a penalty converted by Cristiano Ronaldo.

It is 12 years since Atletico beat their rivals at the Bernabeu and they had a tough task against Real who were looking for their 13th successive win.

Atletico put their rivals on the back foot with an Adrian Lopez goal on 14 minutes. A Diego pass broke the off-side trap and Adrian fired home from close range.

The key moment came mid-way through the first half when Karim Benzema was upended by the Atletico keeper who was red carded and Ronaldo coolly slotted in from 12 yards.

After the break though Ronaldo pulled the ball back for Angel Di Maria to put Real ahead and then substitute Gonzalo Higuain rounded the keeper after 64 minutes for the third.

Atletico were reduced to nine men when defender Diego Godin was dismissed for a foul on Higuain and Ronaldo got his second of the match from the resulting penalty with nine minutes left.

"We didn’t look to go out and cause any problems, we went out to play and to win and some people went home in pain. Luckily the shinpads are made of carbon, they are expensive but they do their job," said Real coach Jose Mourinho.

"We played with discipline and only received one yellow card. We maintained our calm and refused to respond to the provocation but I would have preferred a better game if I had paid to watch it."

The visitors arrived on the back of a 7-0 thumping of Genk in the Champions League and domestically they have lost only once in seven games.

Valencia took the lead with the first real chance of the match when Jonas Goncalves's speculative shot from distance surprised keeper David Cobeno.

Valencia had their keeper Diego Alves to thank for two excellent blocks from Alejandro Arribas and Andrija Delibasic either side of half-time before an excellent team move was finished off by Tino Costa.

Substitute Raul Tamudo scored a consolation for Rayo six minutes from the end.