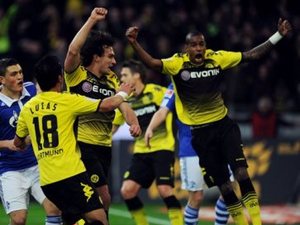 Borussia Dortmund coach Jurgen Klopp has insisted Bayern Munich are still the favorites to win this season's German league title despite his defending champions going top for the first time this season.

Bayern are at Bundesliga strugglers Mainz on Sunday, but Dortmund went top after Saturday's convincing 2-0 win over neighbors Schalke, their first home win over their rivals for more than four years.

Victory leaves them a point clear of Bayern and level on 29 points with second-placed Borussia Moenchengladbach, but Klopp says he can still imagine the Bundesliga title heading to Munich next May.

"Munich are number one title candidates, no ifs or buts," said Klopp after 'Gladbach's 3-0 win at Cologne on Friday knocked Bayern from top place.

"It is insanely tight amongst the teams at the top of the league.

"You have to do everything right, every week and no one can afford a slip up.

"It is especially hard for other teams competing with Bayern as they have a quality squad.

"Of course, they can be beaten on occasion, but they are still the overwhelming favorites."

Dortmund's win over Schalke is all the more impressive as it came on the back of a 2-1 defeat at Arsenal on Wednesday in the Champions League, which all but ends their hopes of progressing.

Germany midfielder Sven Bender broke his jaw in the defeat and teenage star Mario Goetze picked up a knee injury, but still managed to play most of the match against Schalke.

"I'm more than satisfied with our win over Schalke," said Klopp, whose team beat Bayern 1-0 in Munich last weekend.

"It's great, if I am honest. The boys went out three days after a hard game in London and carved out another good performance."