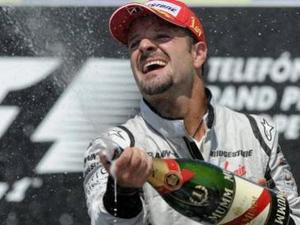 Forget the titles, push aside the record books, most local fans packing into Interlagos here Sunday may even cast off their dream that Felipe Massa, driving a Ferrari, will win their home Brazilian Grand Prix.

Instead, they will be there to cheer another different kind of hero - the old sort, another Paulista, but one who has been there, seen it all, collected the t-shirts and suffered all the slings and arrows in Formula One's longest career.

It is likely to be the day of Rubens Barrichello's reluctant retirement - his enforced 'adeus' to the sport that has seen him start 321 Grands Prix, before lining up 12th for his 322nd, and maybe final.

Once he had the baby-faced assassin looks that now belong to pole-sitter and Red Bull champion German Sebastian Vettel. But that was back in 1993, when it all started. He debuted in South Africa, at Kyalami, before the final dismantling of apartheid.

It was another age, another time.

Then, and there, Barrichello was still a boy, but one instilled with a passion for motor racing that has carried him through 19 seasons on the road, in hotels, planes and, sometimes, tears.

He lost his mentor Ayrton Senna in 1994, just 48 hours after he himself had, as the tabloids of the time put it, 'cheated death' in his own horrifying crash at Imola.

He lost some dignity too, but only briefly, along the way - mostly when left in mute humiliation by Ferrari where team orders forced him to concede positions in favor of Michael Schumacher.

The great sham in Austria in 2002, where Barrichello was told to allow Schumacher to win in the closing meters after the little Brazilian had out-raced him, was the worst of all.

Schumacher refused to take top step on the podium - and Barrichello stood there. Not the winner of the race, but the victor in everyone's hearts.

And that is how he grew to be remembered. He raced for Jordan, Stewart, Ferrari, Honda, Brawn and Williams, he won 11 races and took 14 poles. But his smile and good nature will survive all that.

He does not want to walk away, but nobody appears to have a drivers' seat vacant for him to take. He may have to find a 'shed load of sponsors' to buy himself back in with F1's equivalent of a 'swag bag' but that is an unlikely prospect.

His friends, Massa and Australian Mark Webber among them, have urged him to treat this race as a farewell occasion, but he has struggled with the idea and the reality.

"I will never say goodbye to my people," he told the BBC. "I am a man of Brazil, of F1. My middle name needs to change to Rubens F1 Barrichello. I have no intention of saying goodbye.

"Right now I am part of it, and it's almost like I feel I deserve next year. I will be 40, 20 years in F1, but I have so much motivation. It would be bad not to use my experience, but I can see myself here next year."

Many hope he is right. Few believe it.

Vettel, starting from a record 15th pole in a single season, may win again, raise his finger and grin from ear to ear. But in the paddock, wherever he finishes, it will be Barrichello who will fill most thoughts.

The future belongs to the wunderkind, to his nearest rivals like Briton Lewis Hamilton and Spain's Fernando Alonso, of McLaren and Ferrari respectively.

But this one day may well be annexed the Latin American emotions that will flood and swim around Barrichello, stirring all the memories - Brazil, Senna and the biggest smile F1 grew to love.