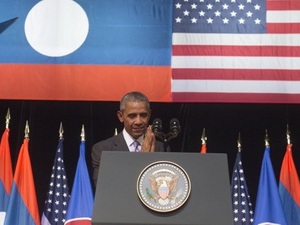 "Today I’ll be meeting with (South Korean) President Park (Geun-hye) to reaffirm our unbreakable alliance and to insist that the international community remains united so that North Korea understands its provocations will only continue to deepen its isolation," Obama said at a regional leaders' summit in Laos.

North Korea on Monday test-fired three ballistic missiles into the Sea of Japan, a new show of force as Obama, Chinese President Xi Jinping and other world leaders met at the G20 summit in China.

North Korea has conducted a series of missile tests this year in defiance of U.N. sanctions imposed after its fourth nuclear test in January.

The U.N. Security Council was due to meet on Tuesday to discuss the latest missile test, which attracted condemnation from Japan and the United States.

Obama and Park were due to meet on Tuesday afternoon in the Lao capital of Vientiane on the sidelines of a gathering of regional leaders hosted by the 10-member Association of Southeast Asian Nations.