Bayern Back to Basics after Mainz Shock 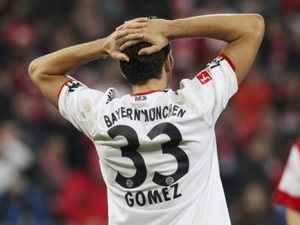 Bayern Munich's director of sport Christian Nerlinger has demanded the Bavarian giants go back to basics after their shock 3-2 defeat at Mainz left them third in the German league.

Bayern's loss on Sunday saw them slip to third, with champions Dortmund seizing top spot in the wake of their win over Schalke in the Ruhr derby on Saturday.

Borussia Moenchengladbach are second on goal difference after they won at Cologne with Bayern a point back in third and Werder Bremen fourth.

Having lost 1-0 at home to Dortmund last Saturday, Jupp Heynckes' Bayern were well beaten again as their defense struggled to cope with a Mainz side who were not intimidated by the German record champions.

The win was no more than the hosts deserved after Bayern repeatedly surrendered possession in midfield, where they are missing injured star Bastian Schweinsteiger, who is nursing a broken collarbone.

The 27-year-old returned to training on Sunday, but Bayern are badly missing his calming influence and control in defense as they have now lost three of their last five league games having also been beaten at Hanover in October.

"We basically have to give a lot of credit to Mainz, but obviously, after a defeat like this, we have to start by looking at ourselves," said Nerlinger.

"The trend in the Bundesliga is negative for us: we’ve lost three of the last five matches, and that’s made itself felt in the table.

"It's not running as smoothly as it sometimes has, and that’s when you have to fall back on certain fundamentals: the necessary aggression, keeping it tight, stopping your opponents creating chances.

"I saw none of that whatsoever, especially in the first half.

"Despite it all, I have enormous belief in this team. I think they’ll dig deep in the last three Bundesliga fixtures and in the cup, and win all four matches.

"We have a normal week of training ahead of us at last. That's good for us, so we can work through a few important matters.

"We’ve neglected the basics in our recent matches, and that’s what we’ll work to fix in the coming week."

Having now won three of their last four Bundesliga games, Mainz are now up to 13th and clear of the relegation zone.

The hosts were rewarded when Austrian midfielder Andreas Ivanschitz struck after just 11 minutes.

Bayern defender Daniel van Buyten equalised on 56 minutes, but Mainz were not to be denied victory as midfielder Marco Caligiuri and defender Niko Bungert scored to put the hosts 3-1 up.

Van Buyten scored his second header to make it 3-2 with 11 minutes left to set up a tense finale, but Mainz held on.

"You can make a plan and tell the team, but the players have to believe in it and make it work," said Mainz coach Thomas Tuchel.

"We didn't allow Bayern many opportunities and we deserved this win."