FFA Chief Not Convinced '22 Will Go ahead in Qatar 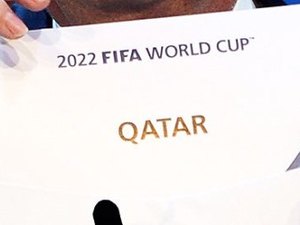 Australia's football chief isn't convinced the 2022 World Cup will go ahead as planned in Qatar.

Football Federation Australia chairman Frank Lowy on Monday said the "last word hasn't been heard yet" on the FIFA vote which awarded the event to Qatar in preference to bids from countries including the United States and Australia.

Lowy did not elaborate on how or why Qatar would lose the rights, but said it related to "the state of the FIFA executive committee."

"I don't know whether you recall when I came back from that fateful day (after losing the bid) and I said 'this is not the last word about awarding the World Cup'," Lowy said after he was formally reelected as FFA chairman on Monday. "Well it wasn't the last word.

"Don't ask me to elaborate because I don't have a crystal ball ... but the media all over the world talking is about that, the awarding particularly of '22, the state of the FIFA executive committee — all that stuff.

"It's not over," Lowy was quoted to say by Australian Associated Press. "I don't exactly know where it will bounce. The only thing I know is it's not over yet."

Qatar's successful bid became implicated in a broad-ranging corruption scandal that plagued FIFA this year, with FIFA general secretary Jerome Valcke saying in a leaked Email that they "bought the World Cup."

There were accusations of corruption in the bidding process and Mohammed Bin Hammam, the president of the Asian Football Confederation and a campaigner for his native Qatar to host the World Cup, has since been banned for life from all football activities on charges of trying to bribe Caribbean voters in his quest to unseat Sepp Blatter as president of FIFA.

Bin Hammam has denied the allegation and is appealing his ban in the Court of Arbitration for Sport.

Meanwhile, questions have been raised about the feasibility of Qatar's promise to air-condition stadiums to combat the searing heat in the Middle East during the World Cup window in June and July.

Lowy, the 81-year-old billionaire shopping center magnate, faced criticism in Australia after the failed bid, which cost an estimated $45 million including taxpayer money.

Lowy said the FFA's focus was on strengthening Australia's A-League and for a successful staging of the 2015 Asian Cup.

The FFA posted a loss for the last financial year after having to bail out several struggling clubs, but remained confident domestic football was on the rise.

Australia switched to the Asian Football Confederation after the 2006 World Cup, to gain more access to higher caliber football than was offered in the tiny Oceania confederation.

"I am concerned that Australia's expectations are a little bit too high and that they want us to win all the time and they don't come and follow it as much as they used to," Lowy said.

"The competition is hard. Asia has improved a lot, but we have a coach and a good team and I expect to be there (in 2014) but I expect to get a bit more enthusiasm from the country."